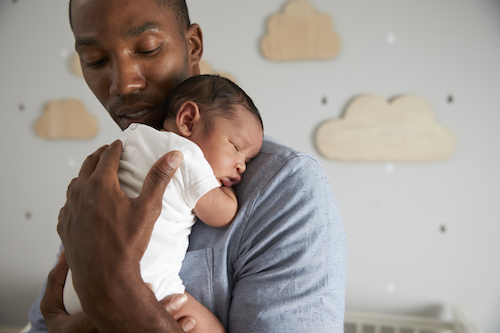 First, let’s talk hormones. Both men and women experience hormonal changes and fluctuations throughout pregnancy and labor. For women, estrogen, progesterone, testosterone, prolactin, corticotrophin‐releasing hormone, and cortisol continuously increase throughout the 40 weeks of gestation.3 At parturition, some of these hormones drastically drop. Maternal post-partum depression can be attributed, in part, to hormonal deficiencies, specifically in progesterone, estrogen, but also cortisol.5

For men, fluctuations in testosterone and cortisol occur. Cortisol increases leading up to delivery, but decreases post-partum.6 Cortisol levels in fathers have also been found to be lower than in non-fathers.6 In addition, expectant fathers have shown greater situational cortisol reactivity, possibly to be able to care for the infant without compromising the ability to respond to an external stressor.7,8 Fathers also experience a decrease in testosterone after birth, showing about a 30% decrease from non-fathers.8 In addition, the more time fathers spend with their children, the lower their testosterone levels are.6,8-12 It is this decrease in testosterone that is thought to occur with long term bonds, such as paternal care.13

In addition to hormonal changes, genetic vulnerability, neural circuitry, life experiences, personality, psychosocial factors, and stress also play a role in post-partum depression for mom and dad.3 For example, there are changes in neural circuitry in the perinatal period which alter mother and father behavior and helps prepare them for parental duties.3 Sex differences in brain responsiveness to infant stimuli have long been proven. Women respond with an “emotional brain,” while men respond with a “socio-cognitive brain” illustrating the emotional response from mom and the social response from dad. Neuroplasticity is prominent after the birth of a child, further illustrating the complexity and ever evolving story of post-partum life.16

It is safe to say that the story regarding male post-partum changes is far from over. As new research is conducted unveiling the differences between men and women, it is important to recognize that not only is mom going through a rollercoaster ride called pregnancy and childbirth, but so is dad. It is likely these changes aid in parenting and ensure infant survivability. It is important to remember to also make sure new parents are taking care of themselves adequately! This includes getting enough exercise and sleep, as well as making sure to talk about what is on your mind with your partner to help ensure a happy, healthy home!