Your Baby Is Watching You! 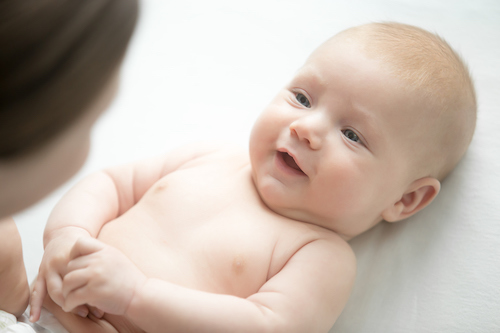 02 Oct Your Baby Is Watching You!

If you think your baby isn’t paying attention to what you do and how you act, think again! It’s no secret that babies are perceptive to the world around them. They are constantly soaking up sensory information and forming cognitive links and connections. They are learning. Since a young brain is a moldable brain, there is some degree of power that comes with that. Parents can control the environment that a child is exposed to and choose to lead as good examples. In a recent study from the Massachusetts Institute of Technology it was found that babies as young as 15 months can learn perseverance and a strong work ethic, when demonstrated by an adult.

Researchers designed an experiment in which 15-month-old babies watched an adult perform two tasks: removing a toy from a container and removing a key chain from a carabiner. Half of the babies saw the adult quickly succeed at the task three times within 30 seconds, while the other half saw her struggle for 30 seconds before succeeding.1 Next, the researchers showed the babies a musical toy which had a visually obvious button that looked as if it would turn the toy on, but did not (the button that actually turned the toy on was out of sight).1 The babies were then given two minutes to play with the toy and try to turn it on. The results showed that babies who had previously watched the adult struggle before succeeding pressed the button about twice as many times than those who saw the adult easily succeed in total, and they also pressed it nearly twice as many times before first asking for help or tossing the toy.1

Another interesting finding from the study illustrated the importance of encouragement through learning. The babies were more prone to work harder and have a stronger work ethic when the researchers engaged with the babies. Such engagement included saying the babies name, making eye contact, and speaking directly to them.1

Effort and work require energy. This study illustrates that babies may learn from a very early age how and where to invest that energy. It may be that adults causally affect infants’ persistence by being persistent themselves.2 By observing, infants may be able to recognize the value of persistence when it comes to new tasks.2

So, how can you apply this to your parenting? If you want to instill a good work ethic in your children, show them what a good work ethic looks like by practicing it yourself. Babies are observing, even when you don’t think they are. But how exciting to know that you may be teaching your baby strong values without even knowing or trying!